Born in 1980, Vadora, India
Lives and works in India

My work starts from where I have been situated in my art-practice and traditional Indian sculpture family background as a middle class Indian, looking for the borders where media, objects, and images are incessantly susceptible to instability. I have been interested in bringing out the question of culture and race, of self and ‘othering’ by employing ‘nature’, ‘real-time’ and ‘space’, especially trying to acquire meanings from ‘colour’ and ‘rust’ recently.

Sometimes, I insert a life-size sculpture of my figure shrouded in ‘colour’, distorted in ‘shape’ or put in strange ‘spaces’. I intend to employ sarcasm and ‘speaks’ about sarcasm politically as if I make resemblance with a bubble-like speech against the white mounted society. This is about my question what sculpture means in deeply rooted recognition between contemporary art practice and family job, which is about conflict and balance inside and outside of time passages. I refer to perceiving the object in actuality, and the mediated reality where the object begets in the form of live telecasts, too. Similarly, ‘Real’ points to the aspect of pervasive spectacularity in my everyday life, which can also be switched off and on fused at any point.

The aspect of displacing all the axes for cognitive perception is fundamental to my art-works. This is not from the identification or interpretation of the meaning of an object but from the dispersion of its contexts when overridden by viewers. So, ellipsis is the most significant feature of my works, where I could enjoy engaging not viewer’s eyes but minds in the interstices between an art-object and its surroundings. The locus of attention is yet retained by the presence of the art-object.. 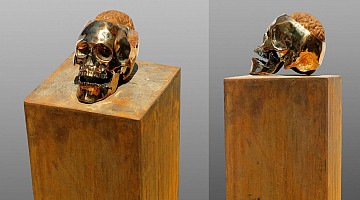