In recent history, many families left their countries in the Arab world for economic or political reasons, to find a new home in Canada.

The project deals with major issues most immigrants have to live through, as well as experiences unique to each family.  Some of the subjects discussed include the role reversal of some of the parents and children as the children took on the role of interpreters for the parents in a new land, and the added responsibilities which resulted; the determination to make things work; the resistance of many of the immigrants to assimilate into the new culture and the intense feelings of nostalgia.

Being an immigrant myself, “Elusive Homelands” is a challenging project because it has forced me to face many personal concerns that I have put off confronting for a long time such as identity, values and sense of self.

I found the generosity of the participants overwhelming as they let me into their homes and lives and shared with me their most intimate and difficult memories. Their personal stories served as a strong impetus for self-exploration. In that respect, this project served a personal purpose.

The subject matters of the artworks, though vastly different, are also complimentary.  They represent my interpretation of the personal histories and current circumstances of each of the families, and draw on some distorted memories of my own childhood and the lives of the people who lived in those memories.  Many of those events and memories that I thought were unique to my experience, were echoed time and again, in one version or another, by many of the interviewees.  The most recurrent themes were the concept of time; the strength of, and the support provided by the extended family; the loss of loved ones for no understandable reason; the keeping alive of false hopes amid the destruction of war; and the sense of futility and impotence as the educated young are drained away from their own country to the West.

The constant migration from one country to another resulted in a fragmentation of identity that predominates in all the photo collages. The Immigrant Experience, Displacement, Nostalgia, and Search for Home are intrinsic issues addressed in these works, which common themes are identity and the search for a place to fit in. 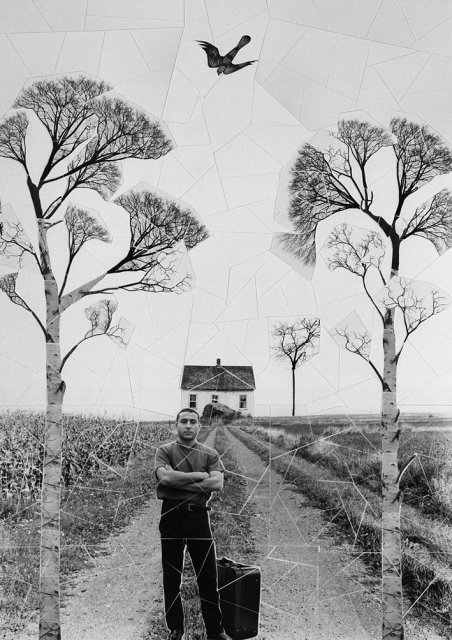 When I met Albert he had barely been in Nova Scotia a few weeks.  The son of a sophisticated middle-class Lebanese family with strong familial and social ties in Beirut, Albert was the typical 25-year-old urban Lebanese graduate.  His degree in graphic design was only the beginning for him.  He knew there was more out there and he was determined to find and attain it.  It was obvious that hard work would not be an obstacle to this man.

Albert’s fierce sense of Arab nationalism was intoxicating.  He appreciated all the ‘Arabness’ of being Arab: the language; the music; the history; the culture; the diversity; the eccentricities; the flaws.  His tenacious grip on his Lebanese roots, particularly so early on in his immigration, was a grave contradiction of his determination to come to Canada but I have grown accustomed to this particular contradiction. 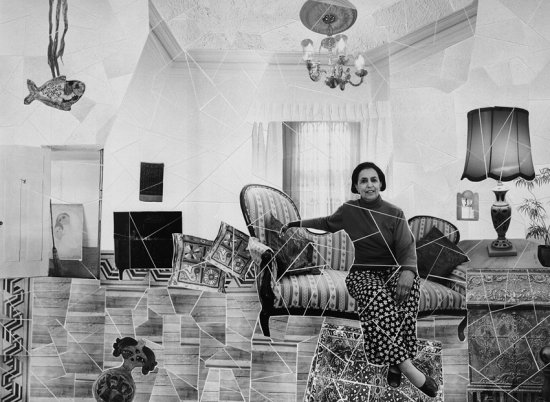 Sarah Lynck was born in Bridgewater, Nova Scotia. Her parents moved from Lebanon in the beginning of the 20th century.

Sarah always wanted to be a nurse, for as long as she can remember. However, being born to conservative immigrant Lebanese parents, it was improper for a young lady to care for male patients. After years of protest on her part, and an uncle who stood by her, she was able to convince her parents to let her enter the Halifax Infirmary in 1946.

Sarah was the first nurse of Lebanese descent to graduate as a Registered Nurse in Nova Scotia. These were happy years, years that expanded her horizons spiritually, intellectually and emotionally. Working so closely with patients was a blessing and joyful.

Coming from a Muslim background, Sarah had never met a nun before she entered nursing. Few people had the luxury to travel those days, and she was 16 years old when she made her first trip to Halifax. Coming by train to a Catholic hospital by herself at this tender age was a big achievement. She was taught many fine principles at the hospital that served her well throughout her life. Her son still recalls the “Nurse Effect” and remembers some: 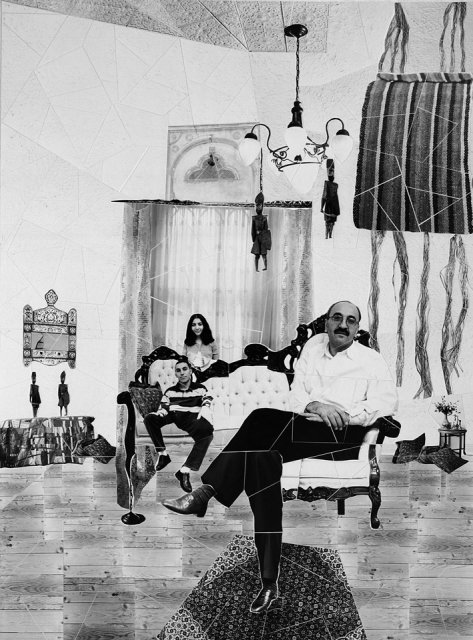 At the turn of the twentieth century, the Aramaic-speaking Turkish community of Tor Al-Abdeen numbered well over 150,000.  Today only 15,000 remain.  Born in 1956, Bassim Khalaf was witness to his decimating race.

Today, sitting in his lavish Halifax home in an upper middle-class suburb, Bassim Khalaf is the quintessential immigrant success story.  He arrived in Nova Scotia in the winter of 1977 and landed his first job washing dishes at a small city restaurant the night of his arrival.   In a span of four years, Bassim obtained his Canadian citizenship and helped twelve members of his immediate family to do the same.  He acquired his own home and established his own successful business and was well on his way to earning a business degree.  Today, he is a successful Canadian immigrant.

Bassim Khalaf, the Turk, was transformed, during a simple ceremony of citizenship, into a Canadian.

There is a beautiful simplicity to the Canadian identity.  There are no qualifiers to being Canadian.  One was simply that: Canadian.  But Bassim lost the rich complexity of his Middle Eastern identity.

To be Middle Eastern entails so much belonging: to a tribe, to a religion, to a country, to a village, to a family.  A last name is more than a shared family name.  It packs a wealth of information about an entire history into a few syllables.  Bassim had traded all that for the wellbeing of his family. 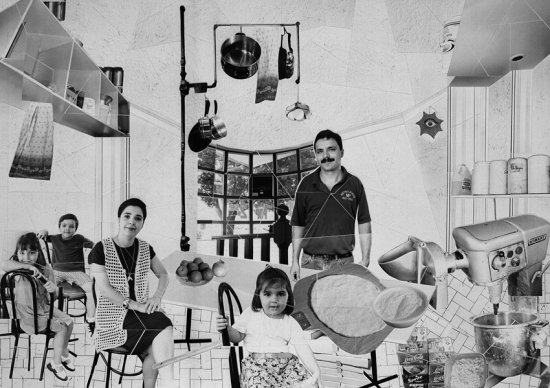 When I met Sam, what struck me the most was the look of resignation in eyes that were far too young to hold that expression.  His was a quiet, albeit grudging, acceptance.  As our friendship grew, the true depth of his intelligence began to manifest itself, along with his sense of entrapment behind his pizza store counter.  He did not belong there and no one was more acutely aware of the fact than he.

Sam was a qualified accountant.  Because of the war in Lebanon, he had left behind a thriving accounting partnership to come to Canada.  His intention was to recreate his practice in his new homeland.  He had realized that it was not going to be easy, but nothing had prepared him for what he would encounter.

With an uncle in Halifax, Bassam thought that he already had one foot in the door.  He already knew someone who would teach him the ropes and guide him on arrival.  His uncle did all he could, providing him and his young bride with a place to stay and a first job in his restaurant.  After work, Sam pounded the pavement looking for accounting work but soon it became apparent that not only were his Lebanese qualifications not recognized, but his twelve years of experience as an accountant running his own accounting firm were not acceptable experience.  He did not have “Canadian experience”.

He realized then that he would have to begin the long journey of requalification but it was going to be a long one and his financial resources were almost exhausted.   In addition to that, his wife’s pregnancy meant that he could not afford to give up his restaurant job and his long hours precluded any chance of part-time study.

Eight years later on, Bassam owns and runs his own pizza store, he owns his own home in the suburbs and has three beautiful happy children.  Many would consider him a successful immigrant entrepreneur.  However, he is very aware of his own potential and of the fact that he has not lived up to it yet. 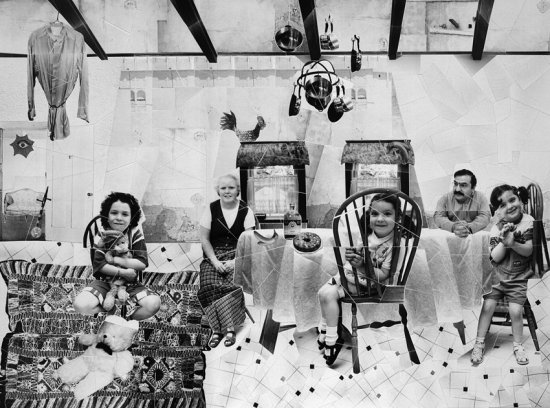 The Peltekians are a neo-nomadic people, averaging one migration per generation. Kevork’s grandparents fled Armenia to Jordan at the turn of the 20th century. His parents, raised in Jordan, moved to Lebanon during the heady days of Beirut’s economic boom. Their children, Kevork and his siblings, were driven out by the civil war. They settled in Canada in the hope that they had finally found their way home.

In an effort to facilitate his assimilation into his new culture directly following his arrival, Kevork adopted the English variation of his name, George. He took to introducing himself as Kevork, “… but you can call me George.  It’s the English version of my Armenian name.” This was how he introduced himself to Ernie at a party.

Ernie remarked that it seemed oddly unfair for Kevork to have to change his name in order to fit into a new society, particularly given all the other changes that he had to contend with. Ernie insisted on calling Kevork by his Armenian name.

Ernie wandered off to fetch himself a drink and caught up with Kevork later on during the evening. During the course of their conversation, a friend of Ernie’s joined them, necessitating a round of introductions. Ernie introduced Kevork as George… the English variation of his name.

Today, Kevork is Canadian and insists on using his Armenian name. 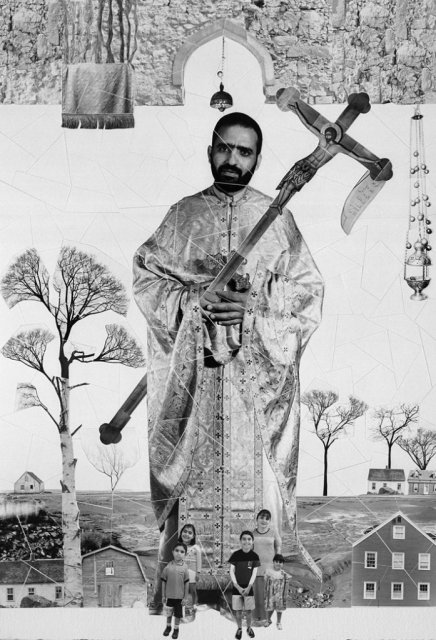 Father Maximos sat behind his desk in his attic office above his church on Windsor Street and gazed at his ceiling, badly in need of repairs.

“Why are you here?” I asked him.  Father Maximos turned his chair to face me.  His expression was not one of surprise, as if my question was not completely out of context.

“The war, like all the new immigrants,” he replied calmly.  “My own people chased me out.  I was accused of helping the Muslims, and, in a war, that was “un-Christian”, I suppose. At some point, my life and that of my family was in danger.  I prayed to the Lord for direction and he led me here.”

Father Maximos was more than a priest to the Arab community in Halifax because he personified the very essence of Christianity.  His selflessness was the reason that the entire community gravitated towards him and he took care of them.  He was there at the birth of the children, the passing away of the loved ones, and the inauguration of new businesses.  He held their hands during the hard times and rejoiced at their successes.  In this far away land he was the immigrants’ father and friend, whether they were Christian or not.

Text by Sulaf and Camille Zakharia

Born in 1962, Lebanon
Lives and works in Manama, Bahrain

Displaced from his homeland in 1985 by the civil war, the Lebanese-born Canadian photographer Camille Zakharia set out on a series of travels to diverse destinations, many of which served as temporary homelands. Photography remains the one constant in his life. The visual record Zakharia captures through his photographic work spans three decades and various locales including the United States, Greece, Turkey, Canada, and, most recently, Bahrain where he currently resides. 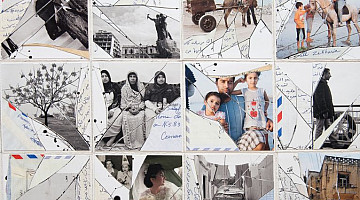 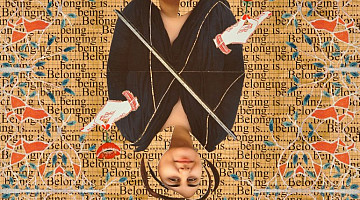 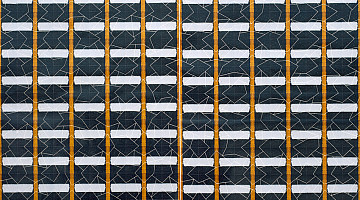