The “fiction” of Erinç Seymen rambles between the clear-cut and the murky, the precise and the unnamed, fable and fact. More precisely, it does not so much ramble as slither; his images are like wounds incised on the surface of the skin with laser beams- the same effect but with higher efficiency.

Once more, the exhibition “The Seed and The Bullet” brings home the theme of the fairytale. Not just one fairytale but the idea of the fairytale; the  seemingly harmless yarn freezing you to the bone when you remember the particulars, or rather when they force their way into your imagination.

The apogee of the fairytale in Seymen’s work is the painting “Persuasion Room”, where the subject of the painting, the adolescent girl with her back turned to us, gazes at various instruments of torture or coercion hanging from a rack. Her expression as far as we can assume from the profile, is terror mixed with awe and longing. This is Little Red Riding Hood in the thick of it, if you will. The thematics of gender endangered and the discursive transformed into the pictorial are always spelt out and buried deep in Seymen’s work. Only to be unearthed by the watchful viewer.

Children who have lost their way is a favorite topic or rather topos. In the exhibition we have at least three drawings of Hansel and Gretel type siblings, trapped in the fantastic landscape they find themselves in. In “Surprise Witness I” and “Surprise Witness II”, not only the outlandish technology and Kafkaesque hardware are a hinderance; nature blocks the way as well. In “I” nature is a field of mushrooms and in “II” it is grottoes and stalactites, bridges off to nowhere swathed in snake skin, patches of- ice? earth? lunar terrain? All painstakingly rendered in fine drawing.

The digitally  enhanced “Loyalty” with its deliberately misleading postcard cuteness is different, at least in terms of technique. Erinç Seymen’s ‘jokes’ (i.e. stuff dashed off in fun and a seemingly slapdash manner, unlike the drawings) are no less cruel than their more craftsman-like, meticulous counterparts. And counterparts they are, since here the ring of children looking as-if-abducted-by-evil-xtraterrestrials are blindly attached to the idea and the fact of an Egg (… seed?). Or maybe they are starry-eyed, a form of blindness. The fallibility of the subject to ideology’s trappings is final in this world of willed submission.

The ironically titled “Patriot” is relentless concerning the objectification of the willing subject. A specimen of young manhood on all fours finely crippled and wired to non-existent ground (or suspended in mid-air) carries the burden of a doghouse taking root, plump and clawish, on his perfectly submitted behind. In this state any possibility of taking shelter anywhere, even in the doghouse, is out of question since it is barred by slats.

The bold, layer-on-layer (pictorially a layer cake almost) approach to ‘meaning’, yet turning the whole structure into an object of perverse fascination, is a remarkable aspect of Seymen’s art. Many of his bondage scenes refuse to be just S/M chic. In “Serva ex Machina”, the tightly bound naked female body seen from behind is surrounded by all kinds of exotic flora and fauna. The vortex the compositional movement describes is site to both brutal discourse and elegant embellishment. The two are uneasy bedfellows. We are face to face with a propeller as it were, one that would begin to rotate were the meaning-laden air around it not too heavy.

The atmosphere in Erinç Seymen’s work is too stifling to make a casual aside or a reverential gesture towards anything in sight. Two collage rendering of queens of the silver screen, (gay) icons surely, testify to this. The iconic faces are erased casually, almost without giving it another thought, abolishing the beauty. In one, the upper half of the head is blown away while in the other the set of eyes are turned upside-down making for a surreal effect. The punch line may be that the frames are “just divine.”

The strict, the poster-like, the sloganist, ‘the pop-defying pop’ as it were, all used to clever effect in Seymen’s art seem to have disappeared in this exhibition. (One is reminded of the baby pink light box spelling out “The Joy of Watching a Lynch On Big Screen” in bold capital letters, a former work.)

Instead, the fantastic, the cruel, the absurd with an ideological twist, always present in his work, seem to have taken over. The four decks of playing cards the artist has devised for the exhibition are mysterious in their invention of suits; “Shoes”, “Birds”, “Weapons” and “Fruit.” All meticulously drawn, each card bears Magritte-ish pears and melons, dodo-like birds out of Alice in Wonderland, mounted deer heads ready to avenge their death with double-barreled gazes, shoes that are a breed between bear and footgear.

It is not only that these intriguing figures are fantastic, i.e. creatures of fantasy. Without doubt, any game of cards played with them would be very confusing. It might, in all likelihood, lead the player back to one of those landscapes Seymen’s lost children find themselves in. 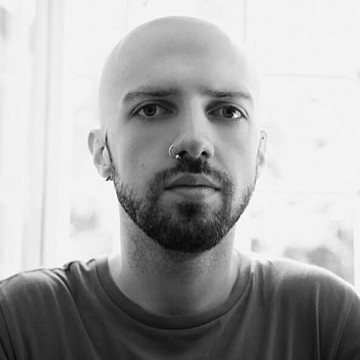 Erinç Seymen graduated from Mimar Sinan University of Fine Arts, Painting Department in 2006 and received his MA from Yıldız Teknik University Art and Design Faculty, with a thesis about Bob Flanagan. He participated in conferences and his articles has been published in various magazines on topics such as militarism, nationalism and gender issues.