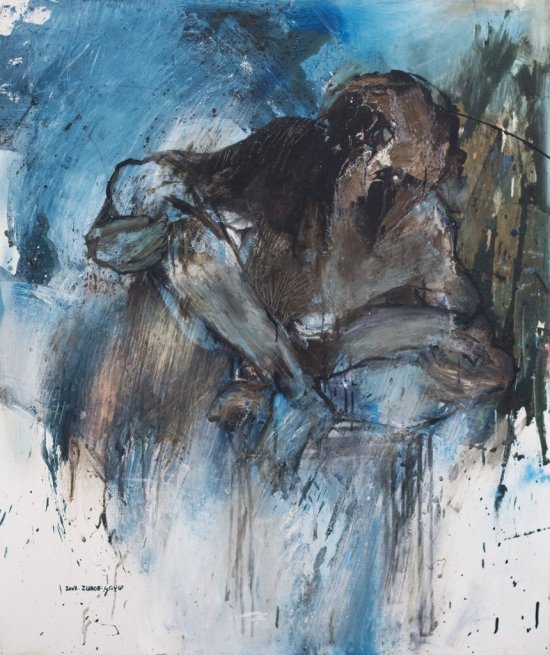 Since the beginning, I learnt that the artist is not a historian, nor a political analyst, and concluded that art is not a matter of talent but of adventure. As a matter of fact, my work of art and my own being have nothing to do with politics or editing; on the contrary, it is a simple view of my private life, being born and grown under the occupation thirty years ago, and having constructed consciousness and unconsciousness under the constraints of its rules, where occupation and its heavy repercussions go into all details of anyone’s daily life in Palestine.

“Standby” is a term that may cross the minds of a few people quickly, or if worse comes to the worst, for the unluckiest, “Standby” may represent just a few hours of “transit” or “an outstanding situation” in some airport or another; actually, in my personal situation, “Standby” goes beyond the simple geographical or linguistic criteria to refer explicitly to the whole Palestinian people who have been placed under such a situation for nearly sixty years now, i.e. since 1948, with a focus on figures because a large number of people mean to associate that with the creation of the State of Israel!!!

My own project, started on 2007, is part of a set of modern artistic works initiated into exhibitions since 2006; painting is the main pillar-guide of my works, with difficulties related to the material tools since I have moved to Paris because I have a certain dilemma to express the ideas I wish to spread, because I am no longer using colours but bitumen as a basic material.

I had an objective of achieving sixty paintings, the main stream of which is a model representing a person standing on a chair, in a stable situation, changing slightly his position from one picture to another, and face expressions too, thanks to what I achieve from the usage bitumen material only, perfectly in compliance with the set of symbols representing the “Standby” situation I wish to demonstrate in each single picture. No sooner seven charts based on this principle have been accomplished, that I discovered I have gathered seven elements into a unique element: the face; from the various colours and material used up to now, I have switched to using black bitumen melted with some henna and pigment only, making of my “sixtieth” project a mixture of asphalt paste representations, applicable in a way quite different from my former and usual work principles: in fact, during the previous phase, I used to stand face to face before my “work of art”, whereas now, I look at it from above, something which has affected the way I look at it: the change in the way I spread bitumen paste aggressively on its surface has totally counterbalanced my view from a vertical to a horizontal position.

The choice of bitumen as a basic material for this “Standby” project was not a matter of hazard, but the fruit of a physical and psychological background during a specific period in my life where my own conscience was growing up day after day since childhood, under the Israeli occupation, where darkness and grey colours have always dominated the home in which I was born, in Rafah Camp during the days and nights of the first Intifadah which had started in 1987, and during which we had witnessed the difficult conditions of curfew imposed by the occupation. Those days have much affected my visual psychological awareness at that time: up to now, I am not able to forget that day when we “woke up” from a long sleep which had lasted forty days under curfew, to discover a completely dark outdoor space, where the outside world had totally been brushed – in all directions – with bitumen: streets, commercial places, houses, and even the long palm tree which used to distinguish so nicely our quarter and which had been dramatically coloured in black up to the half and stood in that state until it had been destroyed by an Israeli bulldozer two years later.

And, from the asphalt dilemma of childhood up to the asphalt dilemma of youth: eight years after, I was part of the first “flow” of prisoners who have been “unearthed” from their homes sight-screened during the invasion of the “West Bank” in 2002. With the number of Palestinian prisoners increasing, new prisons were constructed to lodge them; worth mentioning is the fact that those new prison sections only represented a small area of land around which were placed thick barbed wire also made of bitumen material, covered by kaki and thick tissue material!!!

I was one of those who were displaced to new prisoners where I had to sleep on an earth recently covered by bitumen, and witnessed the “joy” of embracing that nice material with its pleasant smelly odour, during three long days, until they have decided to provide us with rugs in the form of earth covers!!!

After fifty-two black days of imprisoning, the Judge of the Military Court – distinguished by its back colour tent to make the difference with the prisoners’ tents – had decided I am not considered as a danger to the state of Israel and was released to discover that the streets of Ramallah had been transformed into blocks of solid bitumen in the form of bitumen material spread out here and there; all roads had been destroyed and become blocks of raw material made of cement, bitumen and sand after the passage of aggressive intrusion of military tank-busters.

Thanks to the present project, I am probably accomplishing a fact of “killing in me” the artist that I used to be, at least from two points of view: first, by replacing the traditional colour material that I was accustomed to use before by bitumen material as a unique intermediary to express myself. The second act relies in the fact I have totally switched my personal view of my own paintings from a vertical point to a horizontal one, completely ignoring the particular nature of material used.

I wonder whether I was exteriorising the dark side in me into a form of hatred to the occupation of my home land.

This same occupation which is accomplishing its sixty years-old without any single feeling of guiltiness and without realising that it is high time it retires. 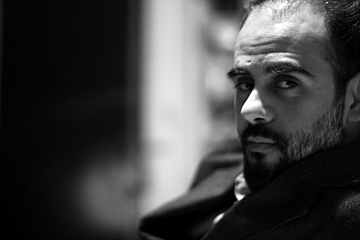 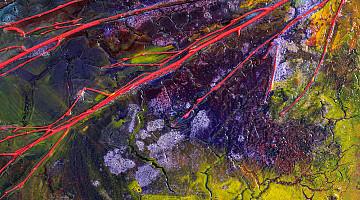 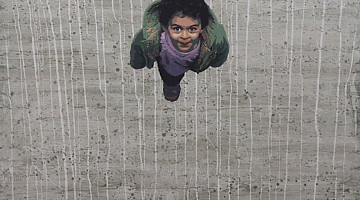