In 2009 I became obsessed with old circus and magicians aesthetics. I first made a collage called "Son of the devil" based on this idea. A dantesque show develops in the heart of a big city and is seen by astronauts from their space ship. After that, I worked in a three collages series about magicians, "La faucheuse", "Carter" and "Raymond", inspired by the darkness of old magicians shows. This three works related the idea of magic to the world of the dead and the communication with the next world.

Dios y el diablo en la tierra del sol (God and the Devil in the Land of the Sun /Black God, White devil) is a collage of images collected from books on classical and contemporary art, as well as from popular graphics, a variety of Bibles, story books, advertising, graffiti, tattoos and old engravings, which were assembled by hand over several months in order to represent a Baroque and restless world where good and evil coexist, one camouflaged by the other, in the manner of a globalized inferno, in which religion and colonialism play a preeminent role. This work was exhibited in the form of a giant poster printed on newsprint sheets, such as those to be seen promoting concerts in the street; thus establishing a conceptual connection to street-art. Just like the countless images that compose it, its title is also extraneous. It was taken from a 1964 film by Brazilian director Gláuber Rocha Deus e o diabo na terra do sol, one of the most characteristic films of the period known as Cinema Novo, where mysticism and superstition mingle with political ideas inspired by the Cuban revolution. 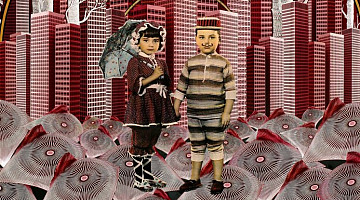 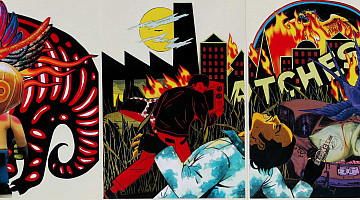