People are able to recognize and appraise things that are used very frequently. We need to have high-technique in order to recognize or appraise things or minds that are too frequently contacted by people. We can not raise any inspiration with a mean expression. Hanbija, who lived 2300 years ago, once said that it is easiest to draw an invisible ghost. Gogaeji, who lived about 1700 years ago and was a painter active in Dongjin, China, once said that you should not draw people trying to resemble just the appearance. He asserted that a painting should reveal the character, disposition and temperament of the person being portrayed.

Shin KwangHo draws person. Figure and personality are different. Person means somebody who thinks and is engaged in a social activity, while figure is a subject who is just seen from a certain angle. His work becomes a person though it seems to aim at a figure. He completes a common person with a specific figure. It becomes a self-portrait of every people including himself who are engaged in social activity. It is spoken well of when it seems apparent to be drawn roughly. It is because as a work of arts, the circumstances including the subject are represented. The world we live in shows interest when we make an ordinary thing special. It waits something new while keeping current situation. Speaking of work of arts, something known not for one's lifetime is a professional's, requiring ordinary people of a special respect. An artist inspires an object, that is happening now or familiar with, with a special spirit. Especially when you see a figure painting, you are accustomed to how much like it is compared to the figure. In this respect, SHIN KWANGHO's figure painting does not depict an accustomed figure around. Nevertheless it is familiar. His painting is understandable with the eyes well depicted. Eyes are the window to look in a person and the mirror of the world. Gogaeji also said that a special attention should be given to eyes in figure painting.

All the figures appearing in his works are individuals and self-portraits. The spirit he wanted to inspire the figures with is that of a distorted hero's or another character unidentifiable with eyes. Majority of specific people are the figures whom he depicts. He distorts a figure trying not to transform the mind and social environment unique to him. It is not the transformation from a person to no person, but from a specific to an ordinary person. He himself is flown into it. It is the method to include his own artistic experience and value. Though it is not clear where to use, works of arts become the criteria in grasping the reality. They reveal thinking while making the figure seen thinking. This is the first characteristics of the person that SHIN KWANGHO draws.

A specific person is thought while lump of dyes are loaded on a canvas. It's inefficient to say 'painted with a brush'. The lump moves freely all over the canvas without staying at a point. A face is treated as the spirit of common people who gaze at the world, rather than as a person. The biggest significance is put on the expression of the inner mind when facing an empty canvas. It is a way of revealing it as a thing to the world rather than representing a person. This is his second characteristics.

Persons, which are represented by Shin KwangHo, are close to a landscape with people appearing rather than a figure painting. It is a little far away from a concrete position of figure painting. It is already under control which object is depicted and what is focused. There is only a person as the reason that the world operates and as the core of it. It becomes not part of nature, but the 'now' of modern people who exist insusceptibly. On the other hand, people are little interested in the painting of stranger's face. It is because there is no criteria of similarity or specific object. Manifested here is the third characteristics that SHIN KWANGHO's persons signify. Any person, whose face is depicted in a painting, bears a perpetual mind. The mind is not coming from the external resemblance of the person, but formed from the relation between the painter and the figure painting. He seeks the life of harmony between individual and society as he has the disposition of adapting himself to the society. The writer lay stress on the value of life and the ecological value of person rather than on the way of existing. He describes person as the future-oriented relations on being alive and as a tool of the world. He dreams a new order through the scattered and disarranged stroke of brush. It is the inquiry of the mind to grope for the existence of society in a new order. 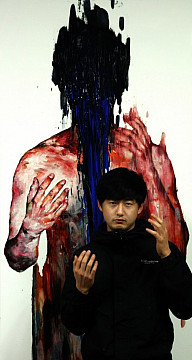 KwangHo Shin is an aspiring Korean artist, noted for his large-scale abstract portraits rendered in thick globs of dark and vivid paint. Born in 1983 in Seoul, the artist got his BFA in 2009 from the Keimyung University in Daegu, South Korea. His paintings are large in size and typically stand over 6 ft tall, and are created using primarily oil and acrylic paint. 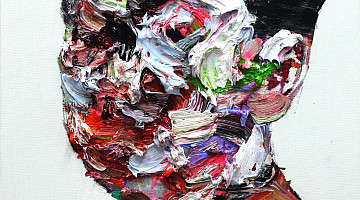 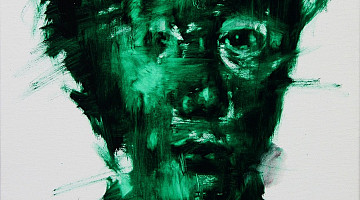