An Emancipation Fraught with Complexity:
Freedom, Mythology and Allegory in Matthew Hindley’s ‘Twilight of the Idols’


Taking its title from Friedrich Nietzsche’s 1889 book of the same name, ‘Twilight of the Idols’ affords the viewer a look at the journey that Matthew Hindley’s paintings have undergone over the last three years. During this time, Hindley’s paintings have begun to define a separate world unto themselves, with each new work acting as a fragment; a peek into a small corner of this alternate painted reality. With each series, an additional region is added to this world’s geography and, perhaps paradoxically, the impression grows that even less is known about it.

In earlier works like The opposite of memory (2009) and The Hour of Lead (2010), the subjects were enclosed within the hermetic space of the artist’s studio. This was an isolated existence surrounded by paint-smeared walls, taxidermy animals, ropes and polypropylene sheet foam. True to the title of Hindley’s early 2011 exhibition ‘An Everlasting Once’, this appeared to be a self-contained, liminal space; timeless and secluded.

As the only painting in ‘An Everlasting Once’ to depict a realm outside of the studio environment, it was the aptly-tilted The End of the World (2010) which changed everything. From the moment that Hindley’s two female subjects stepped out onto the balcony at world’s end, the studio ceased to form the entirety of the known world for them. It simply became a location within something far greater. Subsequently, Hindley’s subjects have dispersed into the great unknown beyond with varying consequences; an emancipation fraught with complexity.

To speak of Hindley’s subjects is not to refer to a coherent, fixed group. The cast changes continuously from series to series, but they are all defined by similar traits. Since leaving the studio, they appear displaced and are inappropriately attired for their surroundings. Whilst having reached adulthood, there is an almost childlike innocence in the way in which they engage with their surroundings, wandering through a world that they appear not to understand. This naïveté extends to the taxidermy hyena which has stowed away with the female subjects in the works from the Waenhuiskrans series. Completely out of place and impractical in context, it may assume a similar role to that of a child’s stuffed animal; an inanimate source of comfort and security. This is certainly suggested by a work such as Dirt and Agency (2012).

The juxtaposition of what does and does not belong within a scene is something that Hindley incorporates into the actual painting of his images as well. The figurative handling of his characters and environments are contrasted with abstract splashes and drips of paint that serve to snap the viewer out of any impression of representational reality. In some cases, such as Healing and Authority (2012) the choice of colour in these abstract overlays enhances the dramatic content of the painting. In others, as with Untitled 1 (Waenhuiskrans series) (2011) and Untitled 2 (Waenhuiskrans series) (2011), these painterly interventions upset the internal logic of the work. Here the black and red drips of paint resemble stalagmites and flow in the opposite direction to the assumed pull of gravity within the scene.

For the most part, the locations in Hindley’s paintings are entirely non-specific and it is only with these Waenhuiskrans works that a real-world referent is cited. The Waenhuiskrans caves are loaded with historical significance in the South African context, having been used by the Boers to house their wagons and cattle. In addition, Arniston, the name of the bay where the caves are located, is taken from the shipwreck of the Arniston in 1815. Just a few survivors managed to find their way to shore. Perhaps, as with Hindley’s protagonists, they found their way into the caves for safety. Similarly layered into the mythology of the area is the legend that the last of the strandlopers, known as Bientang, lived and died in a very similar sea cave further up the nearby coast; Bientang's Cave in Hermanus. Ultimately, it is within the confines of these caves that a sense of sanctuary returns to the works.

The male protagonist depicted in paintings such as One Pearl of Great Price (2012) and The Paradox of Confession (2012) was not quite so fortunate. In this series it becomes clear that the naïveté of the studio expatriates does not extend to those accustomed to the outside. Seemingly ambushed inside an indoor parking lot by three ominous female figures, the works recall the recurrence of mythological trios of women such as the Ancient Greek Moirai (often referred to as the Fates), the Norns of Norse mythology and the Wyrd sisters from Shakespeare’s Macbeth. By incorporating this thematic motif, Hindley’s work is able to play into the rich history of art historical engagements with these three deceptive agents of fate. “Fair is foul and foul is fair” the Wyrd sisters famously declared in Macbeth’s opening scene, referring to the potential of appearances to be misleading. There is an echo within these works of the ongoing saga of a slew of sexual assaults against male hitchhikers committed by a small group of female rapists in Zimbabwe. Forced into involuntary sexual acts (rape of a man by a woman is not recognised as a criminal offense by Zimbabwean law), it is believed that the used condoms are then utilised for Juju rituals (a form of witchcraft). Thus while the central female figure in Hindley’s One Pearl of Great Price may resemble the maternal tenderness of Michelangelo's Pietà, the implications are that her intent is sinister and anything but. There is a shattering of faith in these idols falsified by misappropriation of religion as justification for deplorable acts.

It is the combination of the works set in the Waenhuiskrans caves and the parking lot which bring about the notion of freedom in the sense in which Nietzsche referred to it in Twilight of the Idols. “For what is freedom? That one has the will to assume responsibility for oneself. That one maintains the distance which separates us. That one becomes more indifferent to difficulties, hardships, privation, even to life itself”. The idea is that in attaining freedom, one accepts that misfortune and strife will be inevitable and continuous. These obstacles will need to be overcome, and can be by someone possessing sufficient strength of will. It is in this regard that Nietzche stated the persistently misquoted aphorism, “Out of life’s school of war: What does not destroy me, makes me stronger”.

In Twilight of the Idols, Nietzsche asserted that his conception of freedom was that “The value of a thing sometimes does not lie in that which one attains by it, but in what one pays for it -- what it costs us”. Hindley seemingly extends this by titling his painting One Pearl of Great Price. In leaving the studio, the subjects have faced adversity and trauma, and it is the surmounting of these challenges which empower them on an individual level. Importantly, this is a continuous process that will have to be repeated over and over. For while Hindley’s protagonist may struggle to his feet following the events that have unfolded within the desolate terrain of the abandoned parking lot in The Paradox of Confession, signs seem to point to an even greater discord beyond. It is through the combination of the paintings set in the parking lot and in the Waenhuiskrans caves, that the concept of freedom is implemented into this expansion of Hindley’s universe. In the parking lot series, it is a Dionysian freedom, one defined by chaos and disarray.

In the Waenhuiskrans series it is an Apollonian one of order and structure, a temporary sanctuary. It is in the most recent work in this exhibition, Twilight of the Idols (2013), that a sense of balance between the two is restored. In Twilight of the Idols, very much a conclusion in a sense, we find three individuals situated within a completely darkened space, a void perhaps. Removed from any specific environment, stripped of clothing and props these subjects have been simplified to their base humanity. It is the torch, as the sole source of light within the work, which becomes significant. Light has been a pervasive symbol throughout this body of work, from the city lights in The End of the World, pointing to the existence of an inhabited city in the distance, to the fiery torch in One Pearl of Great Price. Light streams in from the outside of the Waenhuiskrans caves and within this final painting, it is condensed to the beam emanating from a single torch.

“Let there be light!” God declared in Genesis 1:3, amidst the dark of nothingness. In this sense, these figures have become god-like. Upon eating from the Tree of Knowledge, Adam and Eve became aware of their nakedness and were cast from the Garden of Eden. In the Twilight of the Idols, Hindley’s characters instead find themselves on the cusp of creation; a space between order and chaos. It becomes a symbolic tale of the attaining of understanding and freedom at the cost of innocence.

It should be stressed that this is not a grand, universal narrative, nor an overarching truth. The narrative that emerges from Hindley’s paintings within the context of this exhibition is more of an allegory akin to the way Craig Owens used the term: “In allegorical structure […] one text is read through another, however fragmentary, intermittent, or chaotic their relationship may be”. And so it is that Nietzschean philosophy, biblical references and mythological motif are read through the artist’s own Southern African context of history, current events and folklore. This palimpsest (to further extend Owen’s conception of allegory) is then translated through paint into the self-contained world created by Hindley’s brush. Fragmented, ambiguous and perpetually fluctuating between chaos and order; Hindley’s inhabitants are slowly growing accustom to seeing in the twilight of the idols. 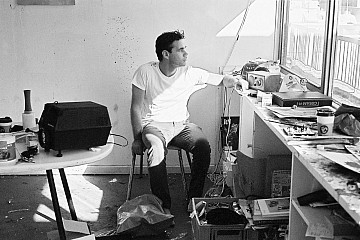 Matthew Hindley graduated at the Michaelis School of Fine Art in Cape Town in 2002, where his final exhibition won him the Michaelis Prize. Recent solo shows include, An Everlasting Once (2011) at iArt Gallery (now Brundyn + Gonsalves) and Like, like, like, like a circus (2009) at iArt Gallery Wembley project space. Hindley has exhibited both locally and abroad including presentations at Biksady, Budapest (2013) and the new Eli and Eydthe Broad Museum, Michigan (2012).

Matthew Hindley: The End of the World and other paintings 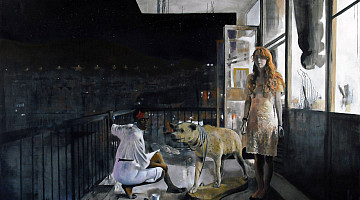