This work is inspired by Raden Ayu Kartini (21 April 1879 – 17 September 1904), a pioneer in the area of the emancipation of women and education in Indonesia. Through letters she shared her thoughts about the problems of her society which seems still topical nowadays. She expressed the view that the world would be more peaceful if there was no religion to provide reasons for disagreements, discord and offence. She wrote: "Religion must guard us against committing sins, but more often, sins are committed in the name of religion.”

This work is about notions of time, appearance and being a physical participant of this era.

*Wikipedia: Postmodernism is a tendency in contemporary culture characterized by the problematisation of ‘objective truth’ and inherent suspicion towards global cultural narrative or meta-narrative. It involves the belief that many, if not all, apparent realities are only social constructs, as they are subject to change inherent to time and place. It emphasizes the role of language, power relations, and motivations; in particular it attacks the use of sharp classifications such as male versus female, straight versus gay, white versus black, and imperial versus colonial. Rather, it holds realities to be plural and relative, and dependant on who the interested parties are and what their interests consist in. Whereas modernism was primarily concerned with principles such as identity, unity, authority, and certainty, postmodernism is often associated with difference, plurality, textuality, and skepticism.

I always ask myself what kind of processes are involved in the creation of history. Why does an event become a memorial and why does a memorial event turn into history? We are able to create history because we are able to compare. History is made because of contrasts. Events or cases that are worth remembering create History, or in other words, only the most extreme events and cases are memorable. Can we simplify history this easily, by dividing everything into black and white, positive and negative, pro and contra? Do we only remember because of experiences that are extreme / new / outstanding/ different? Is history a memory of facts of the extremes, such as the cruelest and the most refined? It must be more then facts related to our senses and legendary moments. Civilization is shaped by the compilation of historical moments. History and the ones in charge are heroes and villains. I read in a book about the East Indies Company that the ones who make history often have the so-called VOC-mentality, i.e., calculated, energetic, and ruthless. The Dutch traveled the world; a salesman before the clergyman, or in other words, trade is more important then principles. Currently, it is trade versus religion. We need monuments and documents (in the wide sense) to keep history in the public memory and influence the interpretation of history. But… the collective memory is short of memory. In Indonesia, its inhabitants experience case after case, scandal after scandal, disaster after disaster. For example, politicians who have dirty hands from the former regime are easily forgiven (or forgotten?) and the candidates themselves run in the presidential elections without shame. Nothing is what is seems, behind every story is another story. In Indonesia, you have to dig up the history behind the stories. The work Dirty Hands is related to black and white images; contrasts of light and dark which catch our existence and the parts that we want to show and the parts that we want to hide.

I made this enormous wig as a comment on Indonesian hair culture. The ‘shaggy' haircut is very trendy and still dominating most girls' hair models in rural Java. This creates a uniform look. Hair is an important part of our identity (covered or uncovered) and much time is spent in beauty salons.

Refugee Only consists of two costumes of which the shape is more reminiscent of a shelter than of a garment. One is made out of textiles for common people, while the leather one with fancy buckles is made for the elite. These shelters refer to the current global reality of migration in which everybody has to be ready to become a refugee. 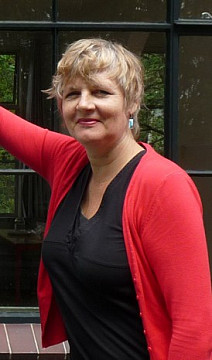 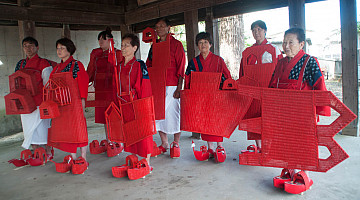 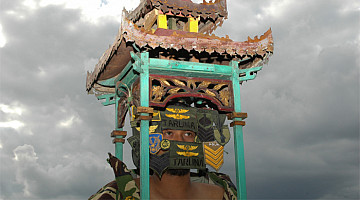