This hyperrealistic series of paintings created by Sri Lankan artist Muhanned Cader shows objects which the artist found thrown or washed up at the beaches of Sri Lanka. Every artifact, the author says, has their own imprint of memories inside. They are reminders of victories and defeats, success or failures and they all are preserved and re-discovered in the garbage. We can also find a parallel to Benjamin-like poet/wanderer collecting “the history in the trash” in this series. There is also an effort, with visible and entitled amount of irony, to deal with the great deeds and gestures of the past and the presence, which, sooner or later, can be transformed into a new trash in the same simple way they were born.

The series Never mind the Bullshit explores the idea of aftermath at the end of a tragedy or disaster. The shapes in this particular series are composed out of a detailed observation of washed up materials found on the beaches of Sri Lanka. Through these paintings, gouache on paper, I have juxtaposed the idea of tragedy with glory, for at the end of any conflict, the winners, or hero's are celebrated, and the rest forgotten. With this body of work I have in my way payed a tribute to the ordinary and not glorious. In memory of all those, and all that stands resistant to the test and trials of time. 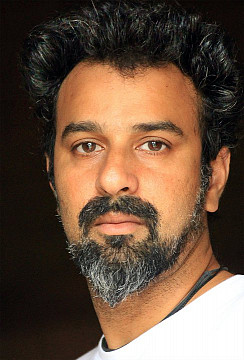 Muhanned Cader began his interest in art as a young student in his home city Colombo, Sri Lanka. From there, he went on to study at the School of the Art Institute of Chicago, USA where he earned his BA in 1994.