My head is a foaming cloud, inside and outside I’m the sea.
I am a walnut tree in Gülhane Park in Istanbul,
an old walnut tree with knots and scars.
You don’t know this and the police don’t either.

I am a walnut tree in Gülhane Park.
You don’t know this and the police don’t either.

Sown onto a stark imposing tree, the hardly legible excerpts from the poem, taken out of context resonate over time  and attain a new significance.  Wise old trees carry the memories of lives lived in this city, of its history, and its metamorphosis.

The motifs used in Turkish kills reflect on the beliefs, lived experiences and environment of the women who weave them.  They may carry a secret message or tell a symbolic story.  Some years ago, Atakan, finding the design pleasing, bought this film without any knowledge about its symbolism.  For this work, she used it as a background for her message, “Don’t Step on Me!” Exasperated by the plight of women in the patriarchal system, she sends a plea to the universe.

In this work, the tulip garden symbolizing the place where Nancy Atakan emigrated joins with the visual dance choreography that she made for her family who embraced her.

Artist Can Küçük describes this work as follows:
“Flowers, which are every second constantly moving towards blooming and decaying, can only rest in a fabric pattern. Nancy reaches out with a choreography in collaboration with the flowers and with them shares the opportunity to stop time. In contrast to flowers repeated at equal distances, separated from life for the sake of timeless beauty, Nancy conveys to us the vitality of imperfect life with her static but varying movements.”

“Motifs in Turkish kilims are derived from symbols that were used in ages gone by to inform, communicate and to convey ideas. Over time, some of these signs merged with myths, acquired hidden significance and moved into the world of esoteric symbolism.  Due to the hidden forces they are believed to imply, their primary purpose may well be psychological rather than aesthetic.”

The artist found it appropriate to use this object as a background for her granddaughter’s childhood memory that would become a part of their family story.

In 1999 Atakan participated in the  International Women’s Art Festival, in Aleppo, Syria.  At that time she encountered a poor but lively city with colorful streets full of rose petal vendors and ancient hans and baths.  At that time she took touristic photographs at archeological sites.

Today, after ten years of war, with half a million deaths, 13 million displaced persons, of which 5.6 million are refugees, for her these photographs acquired another level of meaning.  Not wanting to know if these structures remain standing, the artist imagined them being reclaimed by nature.  While the word maim, usually refers to permanently damaging wounds or injuries to the bodies  of people or animals, she uses it to refer to destruction rendered by men to structures as well.

As a background for her new work entitled, Hand in Hand, she has used an antique intricately sown design that would have been repeated over and over from generation to generation by craft people.  On this background she has arranged two overlapping collages that tell a visual story.  Seven circles represent the seven different decades and seven different worlds she has lived. She covers her genitals with a large hand as Eve in the Garden of Eden because in the story of patriarchic art history the female is represented as shameful. However, in the perhaps the final decade of her life, she believes it is the female, standing firm like a tree that produces flowers and fruit, who must lead the next generation forward by giving a guiding hand, by sharing her strength, energy, and experience.

Presented against a beautiful background, corporations, governments, and those in power justify their actions of indiscriminately slaughtering trees for greater profit.  Rainforests, jungles, and woodlands are being decimated to make space for more cattle, palm oil, and soybeans.  Today this is a planetary emergency. Forests provide oxygen, protect the climate and give homes to 80% of land-based life. 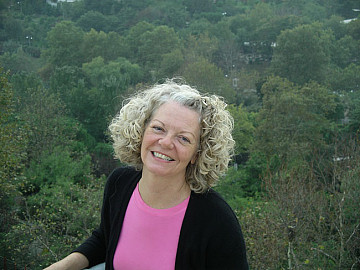 Born in USA
Lives and works in Istanbul, Turkey

Born in the USA, the visual artist and art historian, Nancy Atakan, received her BA degree from Mary Washington College in 1968 before moving to Istanbul, Turkey, in 1969.  Since then, she has lived and worked in Istanbul, where she received her PhD in art history from Mimar Sinan University in 1994 and has taught at the Bosphorus University and Robert College. 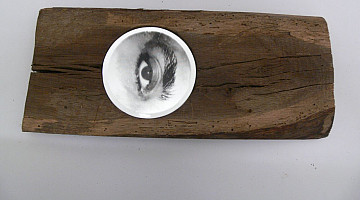