Among the central Igbo of West Africa, a legend survives of a mythic painter named Asele, master of the body and mural painting art of Uli, who was so good and astute in her art that she trounced her contemporaries in the land of the living and went on to repeat her feat in the land of the spirits, whereupon she was retained as a painter to the gods. Among the living her legend passed into myth, and her name was revered and celebrated in poetry and song. She was placed on a pedestal in lore and the popular imagination that is normally reserved for great, war commanders, legendary wrestlers, and poets. Generations of painters looked to her like to a patron saint embodying the ultimate attributes of the consummate artist.

Asele, in turn, may have acquired her extraordinary skill as a painter from the foremost artist of all, the divine painter Ala, goddess of the earth, art, and moral rectitude, who introduced painting into the world when she lovingly decorated the body of her devout messenger, the python, and turned him into a living work of art.

After her accomplishments in the land of the living, Asele proceeds to the land of spirits to compete with the finest of painters in that realm. We are left in no doubts as to the importance of painting. In the broad scheme of the universe, painting and the painter are acknowledged and canonized, and the significance of image making is inscribed as both embellishment and compliment to divine creation.

Ala, the goddess and grand patron of all arts, is not only a painter herself but an indulgent aesthete who seeks obeisance not in blood or with burnt offerings, but demands that her devotees tender instead an offering of beauty; an elaborate gallery of images and lavish decorations known as Mbari. Every so often as a community prospers and finds reason to show its gratitude to the divine painter and the gods, it engages the most renowned artists within its means and bids them erect a gallery in the goddess’s honor, wherein Ala is depicted in all her splendor surrounded by her children and consort, Amadioha, deity of thunder and the heavens, as well as the entire pantheon of divinities and their messengers, attendants, and cronies. Each figure is elaborately attired and decorated, and this divine company is set against a background of colorful, abstract murals with metal and mirror insets.

The Igbo divine painter chooses body decoration as the first act of painting, with the aim to elicit the same pleasurable response as did the Hebrew god who, at the end of each day of his week of creation, looked back at his handiwork, and “saw that it was good.”

The myth of Asele has yet another relevance for the contemporary African painter whose theatre of practice is the West. As noted earlier, it speaks to the desirability of transit and transcendence across borders and realms of origin. It is a potent and inspiring metaphor for the aspiring painter who is able through mastery of her art to levitate herself unto new planes and theatres of practice. Through mastery of her art Asele transported herself to the theatre of the spirits. Her ability to engage such unfamiliar territory—which is in many respects reminiscent of what I have described elsewhere as “the terrain of difficulty”—and command it with enough redoubt to earn the commission of the gods, speaks to artists who come to the heart of the global from “elsewhere.”

As we look again at the myth, it does appear that the burden of painting in all its forms and predilections is to compliment divine creation, and to provide that to which we might look and say, it is very good. That burden is light and bearable.

Born in 1966, Enugu, Nigeria.
Lives and works in Philadelphia, USA

Born in Nigeria and raised in the U.S., Odita became known for Noland-ish paintings that adopted the palette of his African heritage (landscape or textiles), and in the gallery's press release he says the current works continue his exploration of black in both color and sociopolitical senses. 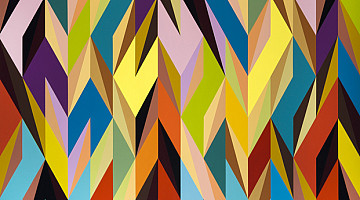