I molded some people´s eyes and framed them in India. I also made hundreds of Korean eyes for 9 months residency in Korea, installing them on the wall. The reason I put the colour "white" is from my racial gestures that I got in Korea, facing each other in some cold and frozen ways in many of public places. From this time, I started to adopt colour in my works as political meanings.

I put several pieces of wet paper on the mild steel plate recording the different surfaces from different times with rust stains. Taken-out rust material stain works might look like timely body checking such as blood test sheets or finger print test  ones done with trust. I meant some visual appreciation of my body talking through gradual changes of colours according to the variation of time.

I nailed on wood plate, covering up the shape of my self-portrait. I personalized some shag owed parts with rust. The two pieces below are each other´s side of one piece like coin, having dense nails and crushed wood pieces combined in and out. 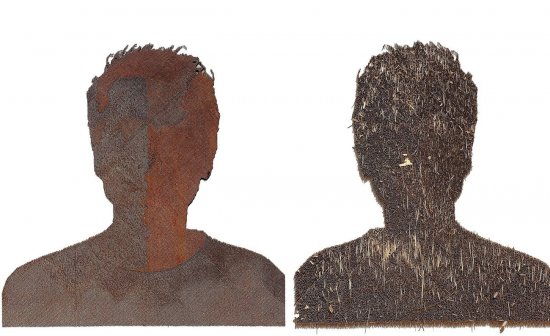 Hard and soft edges is about sculpture means to me. By putting the terms of "Hard and Soft" in title, I tried to portray the tactile sensation of materials while making Indian God and Godness.

Luckily I could visualize the words in very simple art form of frames by putting hairs in a box fully to meet edges of scissors.

This box-like form might be appreciated as commercial display as well, but I wondered what situation I was in between making contemporary art works and Indian god sculptures. 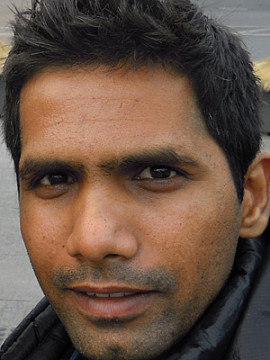 Born in 1980, Vadora, India
Lives and works in India

My work starts from where I have been situated in my art-practice and traditional Indian sculpture family background as a middle class Indian, looking for the borders where media, objects, and images are incessantly susceptible to instability.