Western model of contemporary culture has accepted the world cultural space as a language of contemporary communications. But it does not mean that the world cultural space should “produce identical” being doing “copy-paste” into different separate “private” cultures. Any of “languages” are the methods of self expression of ideas and feelings of one or few personalities. Thereby every personality expresses own relation to the period in which he (she) lives according to request of the time and space.

What actually means Second Hand Culture? This question can be viewed from different angles. E.g. if one thinks from Western point of view (of way of thinking) contemporary artistic language can be considered as its primacy institution and own first language. But those, which are out of Western space, such as Eastern and which has other type of approach than the western language, can study opposite – new language. And afterwards it may be used as a tool to express own ideas or thoughts or one should invent and use completely new method. But here one can
meet some obstacles. Eastern culture representatives instead of studying of western culture language described above are just copying it and then presenting it as their own. Thereby being copied from the primary source the western culture model transforms into second hand culture and accordingly becomes “new unclaimed culture” for current space. Each type of new, whether it is idea, thought or in general a new piece of art can be based on special platform. This platform consists of treasure house of art of the world culture achievements and each piece being created in the future on this basis can be considered continuation of world´s heritage.

Second hand culture is completely separated from such factors as society and truth and thereby contains strictly formal and decorative character. The reason of this phenomenon is that current “culture” completely breaks off from reality of life and in general does not touches problems and dreams of society. To talk about actuality and implication to foremost ideas of secondary culture would be naïve. As the case stands there is no way to talk about analytic and poetic view of contemporary life.

Our reasoning about life is important only for ourselves. Life remains unchanged and eternal out of our reasoning. Depending of level of actuality and sincerity this reasoning can make the life of human being fuller and seminal. In general there should not be any “secondary” in human’s life and especially in spheres such as the culture created by humanity.

Born in 1964, Baku, Azerbaijan
Lives and works in Azerbaijan

Chingiz Babayev is the graduate of the sculpture faculty of Baku Arts University, also the first artist which presented Azerbaijan on international exhibitions of conceptual arts. From his point of view there is no important direction than „land art“ – art on nature. Artist – conceptualist – says Chingiz Babayev, begins to reflect on problems disturbing him. His work – is not answer, it is beginning of thoughts, which can appear in forms of sculpture, video and other apparent structure, visual and sound instalations. There is no aready result of arts. Artist only puts a question. And if viewer joins to his thoughts, then begins joint growth of thoughts. 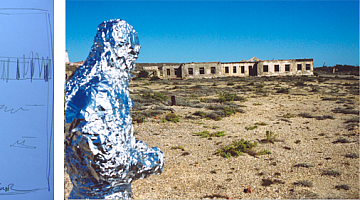