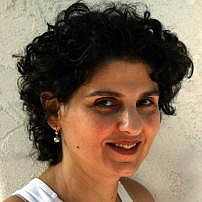 Born in Iraq
Lives and works in USA

I am a multi-disciplinary artist who closely follows history and intertwines it with pattern and decorative structures. In part, my art tests a pattern's veracity to see if it may act as an identifying unit of culture, which I call cultural DNA.  Also, because the word “decorum” is related to the word ”decoration,” I wonder if decoration may be a code for behavior, for how a room should be organized to spur dialogue? Could pattern and decoration be animated into lattices or structures that guide and bridge?

I was born in Baghdad, Iraq of Lebanese parents. A year later my parents returned to Lebanon. Just ahead of the Lebanese civil war, we immigrated to New York. I graduated from a high school that imprinted me with a curiosity to bridge differences between people. After graduating with a Bachelors of Fine Arts from the State University of New York at Purchase I worked as a union organizer for five years. My husband and I settled in southern California where we have raised two sons. My Arabic identity began to reveal itself and influence my art making as significant events in the Middle East unfolded - seemingly without respite. I received my Masters of Fine Arts at the University of California, San Diego in 1993, and began to exhibit, teach, and write. In 2005 we moved to Beirut during dramatic political shifts. I currently teach in the Visual Arts department at California State University San Marcos, travel to gather the “stuff” for new projects, work with civil rights organizations, and write. 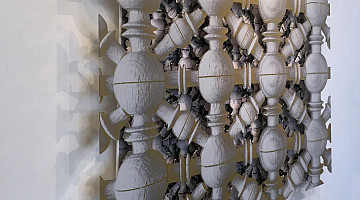